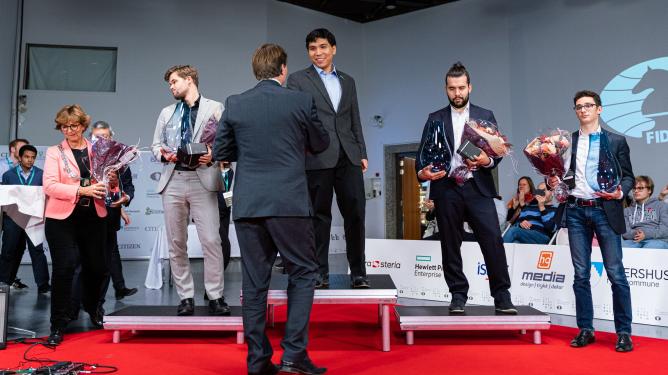 Defending with black in the first game, So agreed to a repetition of moves from a position of strength, then crisply refuted Carlsen’s desperate attack in the second game.

In the bronze final, Ian Nepomniachtchi demonstrated a continued return to form with a convincing performance against Fabiano Caruana. His sparkling victory with black in the third fast-rapid ended their contest and the event.

There was a limited amount of reaction banter to today’s unveiling of the initial position. Carlsen just observed that the kings are well-protected. As usual, So was most enthused, and once again he worked in a castling remark. He also wondered if a player had to touch the king first if castling “queenside” because it was already on the target square, or if a player could finally touch the rook first.

This constant harping back to the semifinal incident with Nepomniachtchi, where their game was eventually replayed, reveals, I think, that So may be extremely modest and polite but has a core of steel. He might not have complained then, but this running routine strongly indicates that having to replay that game must have irritated him greatly.

The crowds for the final day were the biggest of the event, so big that the museum staff was concerned about capacity. Whether this meant that local fans still believed in a miracle comeback by Carlsen and wanted to witness history, or if Fischer Random is again capturing the public imagination is hard to say. Perhaps So’s regular compliments about Norway and its tasty salmon had charmed spectators to attend.

The top duel was the first to finish in the opening round. NRK TV was focused on So’s high pulse rate—though he tends to have the highest “resting” rate during play— the evidence indicated full control by the American. He played extremely quickly, again displaying his affinity for FR chess and coordinating with fluent ease. So’s smooth pressure convinced Carlsen to bail out with a repetition that So didn’t have to accept—but did.

This result meant that Carlsen had to win all remaining fast-rapid games and then score 3.5/4 just to force armageddon. And he had to start this streak with the black pieces.

So in such majestic form, Carlsen was soon reduced to a desperate sacrificial attack just to breathe the vaguest hopes into the position, but the American smothered these with more of his clinical efficiency. The first FR chess world champion is crowned!