As Chess instruction in schools has been used in the classroom as part of the regular curriculum, enrichment or activity for special needs students, many stakeholders have questions such as “What exactly are the measurable educational objectives of a chess classroom?”

Chess, through academic research, has proven to be a valuable tool for improving performance in other subject areas such as Mathematics. Hence, most people would buy into the cognitive benefits of Chess as it is a brain game.

There are also Affective skills and Psychomotor Skills that are often overlooked in School Chess Education.

Often in Chess a Chess match and training session, a student has to use all areas to be an effective player and learner. To win his opponent, he needs to have psychomotor skills (moving pieces in time pressure, reflexes combined with evaluation/intuition), Cognitive Skills (calculation, technique) and Affective Skills (bouncing back from losses, social skills). Below we will see in greater detail what Chess encompasses. 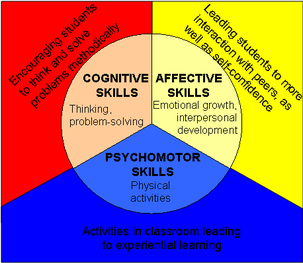 “First of all even if you can make it in Chess, your social skills need to be developed there”

Characterization by a Value or Value Complex

–    One that stand’s out is proper time-management in budgeting time for thinking, anticipating opponent moves

–     Demonstrate how to operate a chess clock (optional)