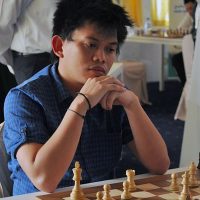 Yap tied for second and third place behind champion Wesley So in the 2007 National Junior Chess Championship.  So, who now plays for the United States and reached as high as number two in the world rankings, has been unsuccessful against Yap, losing their three personal encounters.

His IM title was confirmed during the FIDE Presidential Board meeting in Istanbul, Turkey in March 2009.